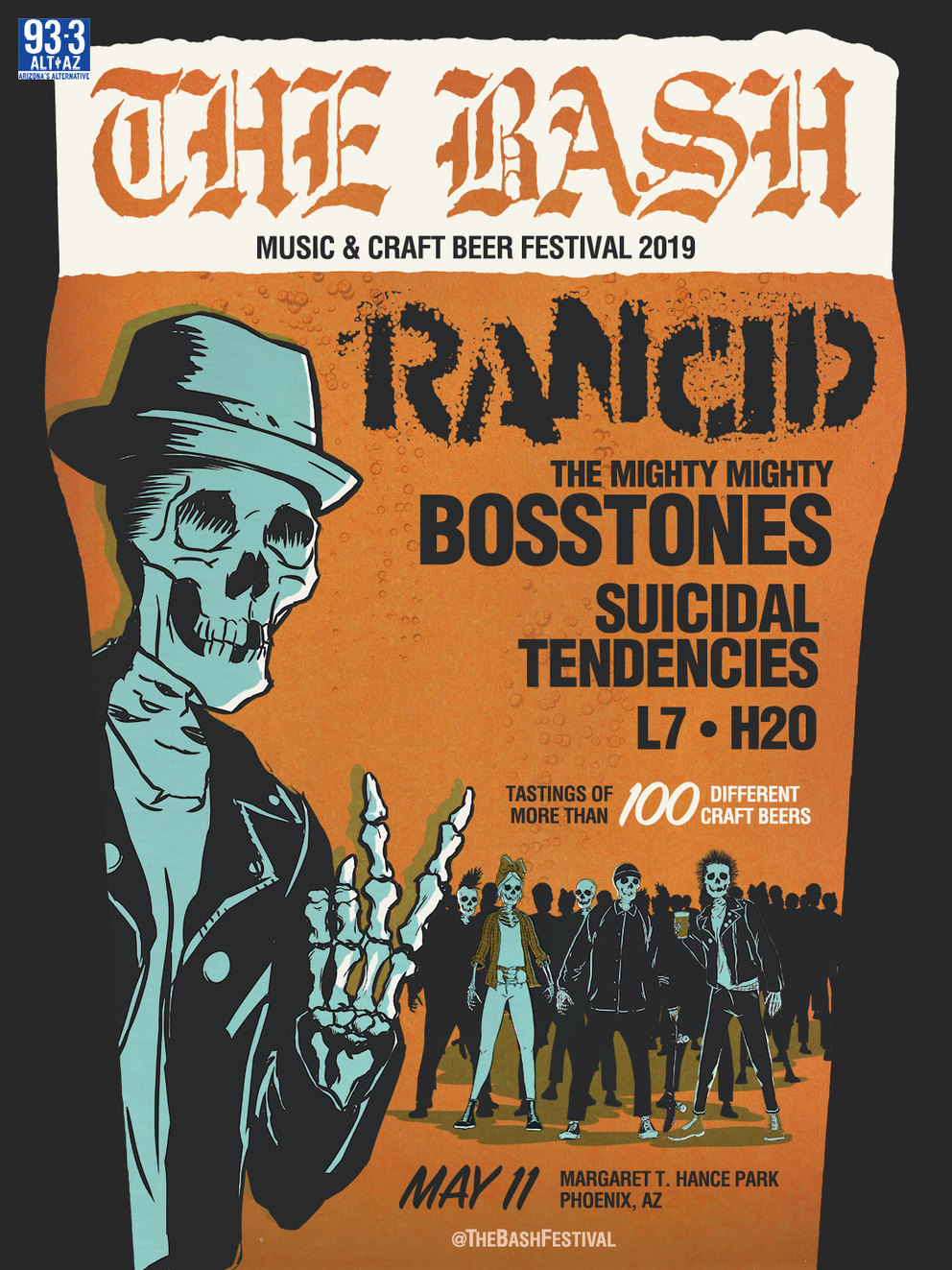 The Bash launches on May 11 in Phoenix, AZ and includes a total of 7 stops in May and June. With a lineup curated by Rancid, all dates of The Bash will feature music from Rancid, Pennywise (excluding Phoenix), Suicidal Tendencies, and L7, along with The Mighty Mighty Bosstones (Phoenix only), H2O, Madball, Noi!se, and Sharp Shock on select dates. Each date of The Bash will also host craft beer tastings (until 4:00 P.M.) from some of the best breweries in the country. Beer tastings will vary by city according to local alcohol laws and restrictions. Music and brewery lineup details per date can be seen at http://www.TheBashFestival.com.

Tim Armstrong of Rancidsays, “I’m looking forward to playing with some of my favorite bands in the world. Pennywise, Suicidal Tendencies, L7, and more. We look forward to seeing everyone out at The Bash!”

John Reese, CEO of Synergy Global Entertainment and co-producer of The Bash adds, “I am a massive fan of these bands, and the chance to launch this event with Rancid is really exciting for SGE. The band has been so engaged in developing this special series of shows, and it shows how much they care about their fans.”

In addition to a diverse selection of participating beers and breweries, each date will offer Brewstomper Golden Ale — a collaboration between Rancid and Ska Brewing out of Durango, CO. Brewstomper will be available at all dates of The Bash for sampling and at concessions, as well as everywhere that Ska Brewing is sold, in both cans and on draft.

“The Bash is going to be absolutely epic,” says The Bashco-producer Cameron Collins of Brew Ha Ha Productions. “The lineup of bands pair perfectly with the craft beer industry’s spirit of creativity and independence! We’ve brought in some of the most exciting breweries and beers in the nation for The Bash, it’s a MUST attend event!”

VIP tickets include: One VIP admission ticket to The Bash; a dedicated VIP entry lane into the venue; one hour early entry for up to 4 hours of craft beer tastings (Noon – 4:00 PM, 21+ only); and access to the The Bash VIP Lounge, which includes: comfortable areas to sit and relax, a VIP bar, private restrooms, convenient food options available for purchase, and more. After 4:00 PM all ages are welcome into the VIP Lounge area. Additional VIP ticket perks — including views of the main stage and exclusive beer tastings — vary by market.

For more on The Bash, visit: