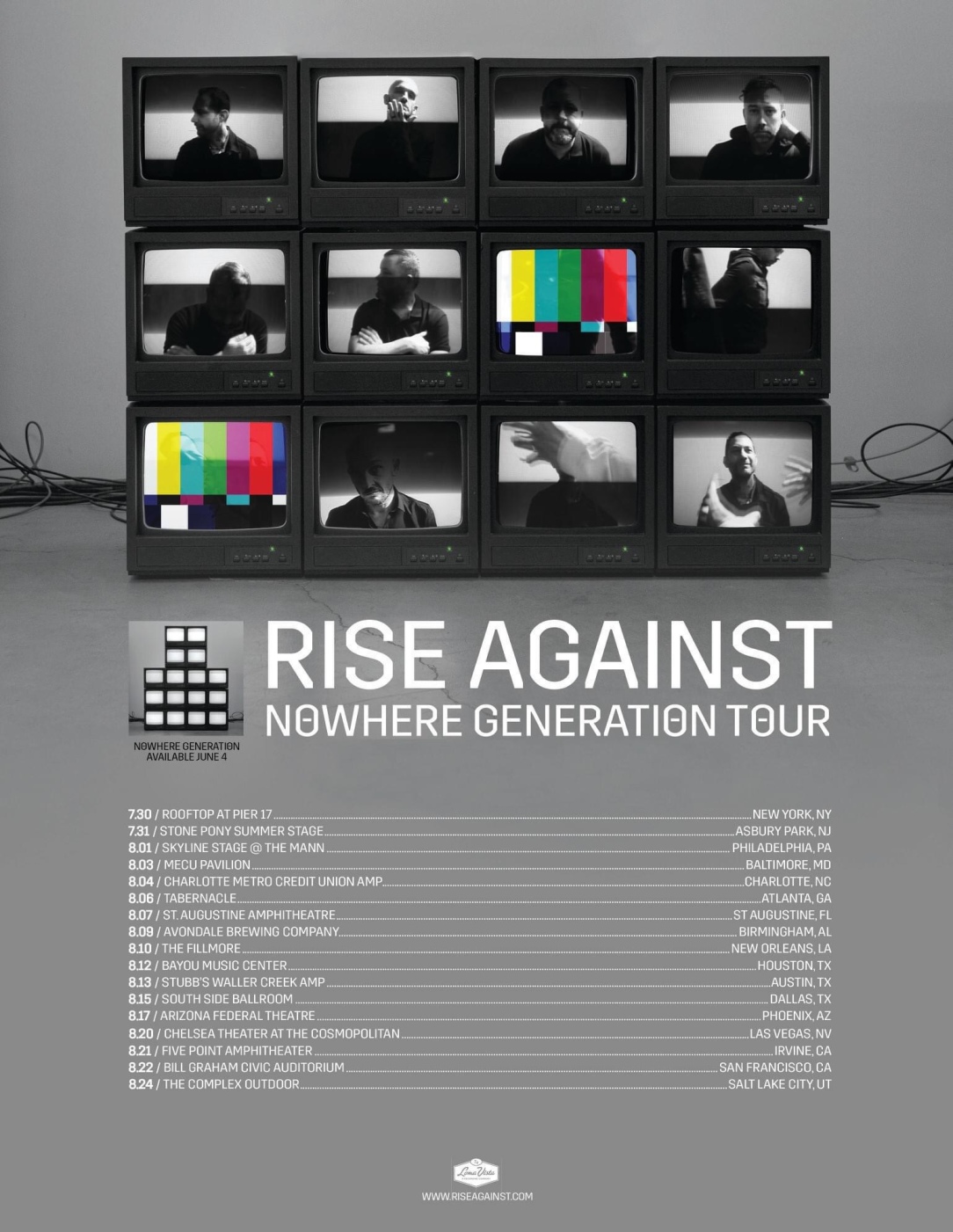 By RockViewLive in RockView Live News on May 10, 2021
No comments

LOS ANGELES, CA – Monday, May 10, 2021 — Fans of RISE AGAINST, you are about to be liberated from lockdown. Today, the band – Tim McIlrath/vocals, guitar, Joe Principe/bass, Brandon Barnes/drums, and Zach Blair/guitars – announces the “Nowhere Generation Tour,” 17 live-and-in-person concerts taking place coast-to-coast, primarily in open-air amphitheaters. Produced by Live Nation, the tour kicks off on Friday, July 30 in New York at Rooftop at Pier 17, making stops in Atlanta, Dallas, Philadelphia, Southern California, and more, before wrapping on Tuesday, August 24 in Salt Lake City at The Complex Outdoor. The general ticket on-sale starts this Thursday, May 13 at 10AM, and purchases can be made at RiseAgainst.com. A special Rise Against presale will be available beginning Tuesday, May 11 at 10AM local time.” “A year without live music in a time when we needed it most has been trying for all of us,” said Rise Against’s Tim McIlrath. “Live music has been missing from all of our lives for far too long. We can’t wait to fix that on the ‘Nowhere Generation Tour.’ It’s been a long year, and we have a lot to say about it…” Rise Against’s “Nowhere Generation Tour” is in support of the band’s ninth album, Nowhere Generation, the band’s first new studio effort in four years, due out on June 4 (Loma Vista Records). The album’s first single, the title track, is already Top 15 at Rock Radio, and has accumulated more than four-million global streams. Nowhere Generation was recorded at The Blasting Room in Fort Collins, Colorado, under the tutelage of Jason Livermore, Andrew Berlin, Chris Beeble, and long-time producer/engineer Bill Stevenson (Black Flag, The Descendents). The album fearlessly illustrates why Rise Against is one of music’s most resolute, politically, and socially conscious punk rock bands. In a nutshell, the new album is blistering, defiant punk rock, with outspoken lyrics that shine a light on today’s political and economic instability, the exponential escalation of citizen disenfranchisement, the blatant sell-out of the Middle Class, and the inequitable achievement of The American Dream.